There is a fable about Spanish artist Pablo Picasso that illustrates an important principle underpinning the Growth Mindset - the importance of building a backstory of growth.

Picasso was sitting on a park bench in Central Park, New York, when a young woman came up to him and asked, “Could you draw a sketch for me, please?”

Picasso got out his sketchpad and pencil and quickly sketched a portrait of the young woman. 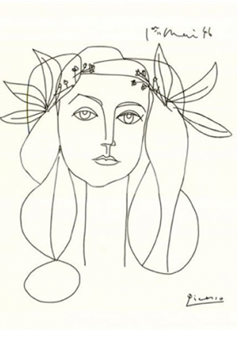 She beamed as he handed her the sketch. “Oh, it’s so lovely!” she exclaimed.

Before the young woman turned to leave, Picasso said, “That will be one million dollars, please.”

“A million dollars!” she said in surprise. “But it only took you two minutes.”

“Ah,” said Picasso. “I think you’ve misunderstood. You see, that sketch didn’t take me two minutes. That sketch took me a lifetime.”

This fable highlights the true value of expertise: the backstory.

"While we often place value on the end product, the true value of expertise is derived from the years spent developing abilities that make it possible to produce the end product".

The backstory is of critical importance to our Mindset. Too often, we ask ourselves, “Am I like Picasso?” or, “Do I have the abilities of an Einstein?” We look inside ourselves and ask, “What abilities do I have?” We don’t appreciate the need to build our backstory. We expect to discover our abilities.

The same is often true when we look at other people’s abilities. When we see people with talents and abilities, frequently in the absence of their backstory, we assume they have always had those skills, or at least that they’ve always been better than others.

The notion that we are born with certain talents and abilities is the Fixed Mindset view of the world. People with a Fixed Mindset expect to “discover” their skills. They believe people like Picasso have always had their abilities, and that’s why they can create art. These people think being an artist comes before doing the art. They don’t see the artist’s backstory, the process of becoming an artist.

All the value is in the backstory

Ray Allen, one of the NBA’s greatest three-point shooters, understands that the true value of achievement is in the backstory when he says, “When people say God blessed me with a beautiful jump shot, it really pisses me off. I tell those people, don’t undermine the work I’ve put in every day. Not some days. Every day.” 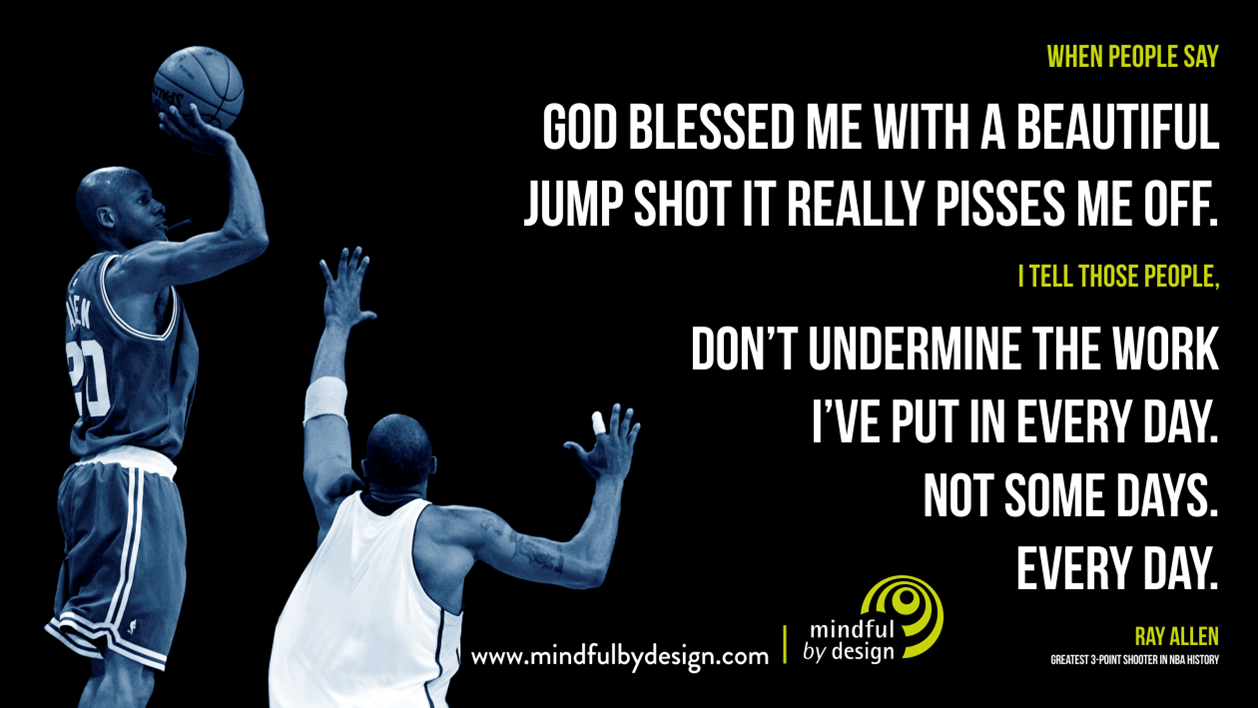 Like Allen and Picasso, people with a Growth Mindset understand the importance of the backstory. They don’t look inside themselves, expecting to discover their abilities. They know they need to develop them. They recognise that to become an artist or a basketballer (or anything else), they must go through the process of becoming – they must build their backstory.

This point is particularly important in our school environments. People with a Fixed Mindset see their abilities as unchanging. So, while they may once have been very good in their role, if that role changes – perhaps because of some disruption – they will find it difficult, or impossible, to respond to that change. Almost all leaders have worked with someone like this who fails to grow in response to change.

Growth, and responding successfully to change, requires us to develop our abilities. We must build our backstory. We need to recognise that we are not the person we are going to be in five or 10 years’ time. That person will require new talents and abilities. That person will need to look back on the time between then and now and value that time spent growing and developing. The time spent becoming the person they are today.

"The challenge is that building a backstory of growth is not easy. Understanding that you need to grow and you’re capable of growth – a Growth Mindset – is important. But it’s not enough".

Of these, developing more mature and sophisticated Habits of Mind is the most difficult.

Habits of Mind - tools for building a backstory of growth

The Habits of Mind are a set of behaviours described by Professor Art Costa and Dr Bena Kallick. The 16 Habits were derived from observations of some of the world’s top performers as they stretched and challenged themselves to become even better. In short, the Habits of Mind are the behaviours that must be developed in order to succeed, not at the same level of difficulty, but at increasingly difficult tasks. 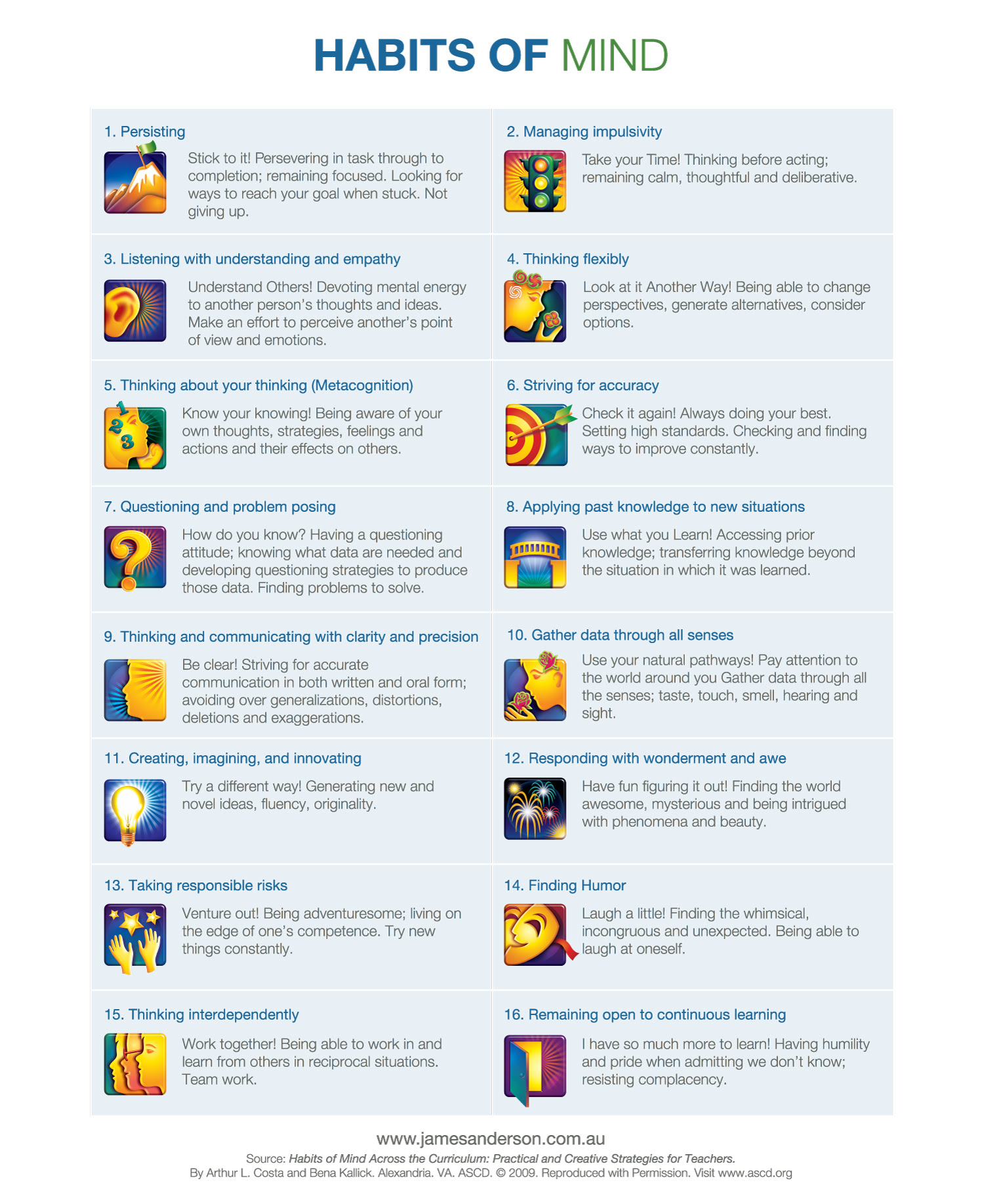 Take a moment to think of someone you consider successful at what they do. How many of the Habits of Mind do you seem them engaging in regularly? As you reflect on the students you teach, how might their outcomes improve if they developed these Habits of Mind?

Most people are prepared to stretch and apply themselves to challenges beyond their current abilities. But when they do, they tend to focus on what they are learning, not how they are learning. They take their existing behaviours – their Habits of Mind – and apply them to more challenging tasks or roles. As a result, they fail to succeed and grow.

But to succeed at increasingly difficult tasks or a challenging new role, to become better at what we do, we need to learn how to behave more intelligently. Our backstory needs to be one of deliberately changing our behaviours and developing more sophisticated Habits of Mind.

Picasso didn’t spend a lifetime painting. He spent a lifetime working out how to become a better painter. He stretched and challenged himself to do better. And to do better, he had to improve the way he engaged in the Habits of Mind.

In the process, he matured not just his skills as a painter, but also the way he approached becoming a better painter – he developed his Habits of Mind. He became better at “creating, imagining and innovating.” He cultivated his ability to “gather data through all senses”. He improved the way he “managed his impulsivity,” and much more.

Picasso created many paintings, some of which are worth millions of dollars today because they reflect a lifetime of becoming a better painter.

If you’d like to work together and find out more about the Habits of Mind and how to build your backstory to develop the talents and abilities of your staff and students,
simply reply to this email and tell me a little about your context. Alternatively, use this link to book a time in my calendar to discuss how I can support your work.