Developing A Growth Mindset Culture In Your School

Have you ever been the victim of a personality test?

You know the type of test I’m talking about. Someone at your school gives you a survey asking you a bunch of questions. Then you get a nice, coloured chart that describes your strengths and tells you what type of role you’re suited to.

These tests certainly have their place. But if they are not used appropriately, they can contribute to a Fixed Mindset culture in your school.

Too often, personality tests are interpreted as a permanent reflection of who we are. They are used to categorise us as being a certain type of person who is suited to or cut out for a limited number of roles. This implies we are not a fit for other roles because we aren’t the right “type”.

Let’s take a moment to explore the consequences of Fixed Mindset Culture, and the benefits of creating a Growth Mindset culture.

Creating a Fixed or Growth Mindset culture in your school

A Fixed Mindset culture of “being”

If leaders administer personality tests with the intent of “identifying” people who are “suited” to a particular role, they contribute to the creation of a Fixed Mindset culture in their school. A culture where people must “be” the right type of person and “have” the right abilities.

Once a test identifies a person as “being” the right type, they are, in effect, given an identity. They are the manager, or the creative, or the high-potential teacher. This person often feels the need to protect and defend that label. They must continually prove who they are.

In a culture where people are defined by their role, challenges pose a particular risk. Mistakes or failures are perceived as evidence that they aren’t suited for that position, threatening their identity. So, people avoid challenges and tend to stay in their Comfort Zone. And when they do make a mistake, they are more likely to cover it up rather than address it.

"Being perceived as (naturally) suited to a particular role also leads people to believe their job should be easy for them. Excessive effort is considered a sign of weakness or deficit. The result is that people often try to make their work “look easier for them” to prove they are that type of person."

In a Fixed Mindset work culture, feedback offered by prinicipals is often received as criticism. People see feedback as a questioning of their suitability to be in their role. After all, if they’ve already been identified as “being” the right person for that role, why would they need someone to tell them what to do?

In her book, Mindset: The New Psychology of Success, Carol Dweck describes the Fixed Mindset culture that existed at Enron. The energy-trading and utilities company only selected the most talented people to work there. It was going to be the best company in the world because it hired the best people in the world.

Unfortunately, labelling people as “being” the best and “being” talented meant employees felt they needed to prove themselves and “look good”. Mistakes were covered up. Team members competed to prove who was better – to the extent that millions of dollars were wasted as departments competed against each other. Instead of confronting problems and working out solutions, teams passed on blame.

Ultimately, Enron’s Fixed Mindset culture led to its collapse. It went bankrupt and was also the subject of fraud investigations. The documentary Enron: The Smartest Guys in the Room details the company’s story.

A Growth Mindset culture of “becoming”

The more growth-oriented way of using a personality test is to begin with the question: What role would you like to have in our school?

In this environment, a personality test is used to determine how well a person’s current strengths match a particular role. It identifies areas for future development. It is also used to create a plan that prepares the person for their position. Of course, that plan includes where their journey of growth should begin (based on their current strengths), and potential roles that would provide them with opportunities to grow.

When schools frame personality tests this way, they contribute to the development of a Growth Mindset culture of “becoming”. The teacher is not measured, assessed and dropped into the role they are suited to. They are guided, supported and helped to develop the strengths they require.

"A Growth Mindset culture allows a school to respond to change and disruption more effectively. Principals embrace challenges as opportunities for growth. They provide the stretch necessary for teachers to develop new skills and abilities."

A school culture that expects people to grow and change is one where teachers are more agile. Because they are not bound to a role they are “cut out for”, they respond to challenges more quickly. They develop new skills and abilities based on the needs of the school, instead of being stuck in a role that defines them.

In a culture of becoming, people see feedback as a way of helping them grow. It is not only accepted but actively sought. The success of other people is recognised as the result of their efforts – not because of some innate quality. Successes are celebrated not only in terms of achievement, but also as evidence of the growth journey everyone in the school is on.

How to Create a Growth Mindset culture of becoming

Where a school falls on the Mindset Continuum is the result of what I call Mindset Movers. These are subtle but powerful messages that fill our schools and push them towards one end of the continuum or the other. How we frame and interpret personality tests is one example of a Mindset Mover. 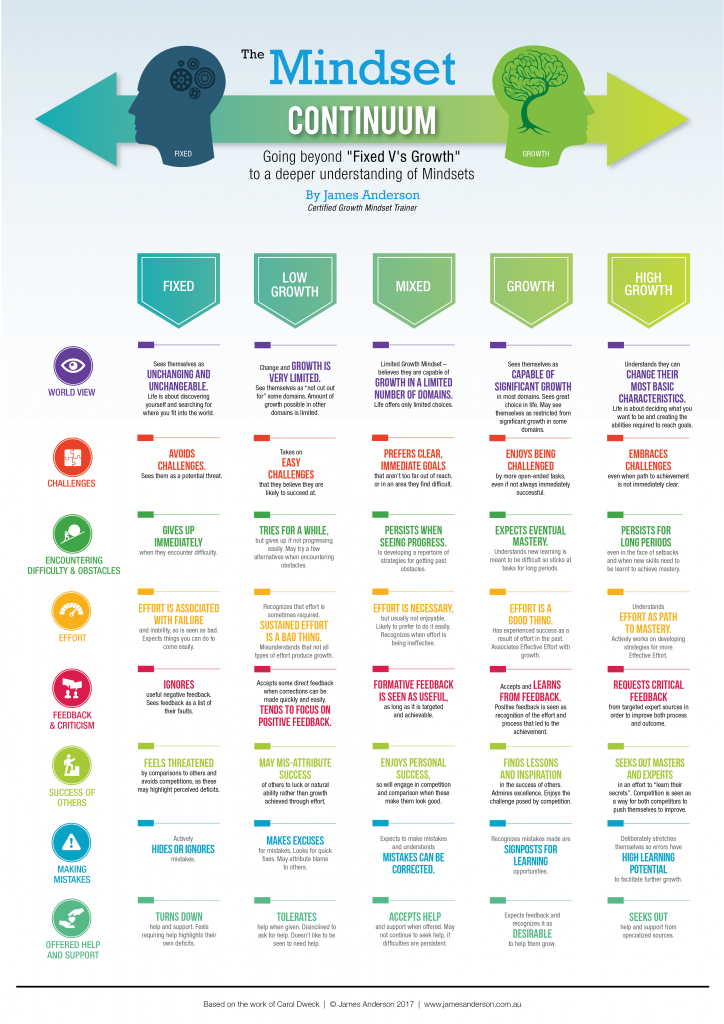 Unfortunately, common learning practices are full of Fixed Mindset Movers. This is because our society has a history of categorising people as being fundamentally and unchangeably different from each other.

Our education system is filled with similar messages, grouping and categorising people as being better or different from each other. As a result, we tend to have cognitive biases that lead us to mimic these practices in our schools – and unwittingly fill them with Fixed Mindset Movers.

How to give your culture a growth “nudge"

To help us overcome the patterns of past behaviours that recreate Fixed Mindset Movers, we need a “nudge” in the growth direction. The term “nudge” comes from behavioural psychology. It describes something we create to help influence our decisions in a particular way and overcome cognitive biases, routines or habits.

An example of a Growth Mindset Mover is “assessment is about where you are, not who you are”. When we carry this nudge and apply it to our teachers profiling, it reminds us that a personality test is a snapshot in time. It is not a defining assessment of that person’s abilities or suitability for a particular role. It encourages us to think beyond the assessment and ask how the organisation can develop this person. This nudge helps us overcome our tendency to categorise people “vertically” and unintentionally limit their progress.

A similar nudge is “strengths are relative, not absolute”. This nudge reminds us that although we may have strengths in particular areas today, these don’t need to be our strengths in the future. We can work on our current weaknesses to the point where they become our future strengths. This nudge helps us overcome our tendency to categorise people “horizontally” into different roles or types. It encourages us to recognise that our teachers are capable of developing abilities that will allow them to move between different roles.

If you’d like to learn more about how we can work together to create your own Growth Mindset Style Guide and a Growth Mindset culture in your school, please shoot me an email, or book a time in my calendar so we can set up a time to begin this journey together.